Until now, there has been no instrument in the field of healthcare that ensures good diagnostics for deep and difficult-to-reach tumours.

The standard technique for endoscopic sampling is to initially use biopsy forceps. This instrument is designed for superficial sampling. For tumours under the mucous membrane (referred to as submucosal) or difficult-to-biopsy changes, samples are taken by a digging motion at the same site (referred to as bite-on-bite), but the sample material obtained is often limited. A tissue sample of poor quality increases the risk of an uncertain diagnosis. If a diagnosis is not reached, sampling continues with more advanced methods, e.g. ultrasound-guided fine needle aspiration (EUS-FNA), which generates small amounts of cell samples that are not the same quality as the diagnostically-stable “solid” tissue biopsies. X-ray-guided biopsy with core needles from the outside and through the body can then be considered, but is more invasive than endoscopy. The last resort is to perform surgery on the patient to remove a piece of the lesion for diagnostics or remove it without a confirmed diagnosis.

In the healthcare sector, it is generally accepted that there is currently no existing instrument or method that optimally meets the requirements for diagnosis of deep and difficult-to-reach tumours. Another limitation of conventional flexible biopsy instruments is that the disposable instrument must be pulled up out of the endoscope’s instrument channel for harvesting after each individual biopsy, i.e. up to six times during normal sampling. The procedure involves increased suffering for the patient, and is time consuming and thereby costly for the healthcare sector.

For rigid needle instruments for diagnosing breast cancer or the like, core needles are primarily used. These core needles are fired by means of a powerful spring according to the “fire and forget” principle, where both the depth and direction must be estimated by the sampling physician. This leads to poorer sampling control and thereby greater risks for the patient.

Great increase in the number of cancer cases

According to the WHO, the number of cancer cases globally is expected to increase from 18.1 million in 2018 to 29.3 million by 2040. This 60 percent increase in the number of cancer cases is mainly due to a growing and ageing population and continued spread of the Western lifestyle. Cancer is estimated to have caused about 9.6 million deaths in 2018.

The global market for endoscopes and associated equipment has an annual turnover of SEK 225 billion. Approximately 30% of this market (approximately SEK 70 billion) consists of endoscopy accessories, which is BiBB’s product category. The USA is by far the biggest market, accounting for about 45% of global sales. Globally, approximately 9 million patients annually suffer from cancer of the lung, stomach/oesophagus, intestine, breast and prostate. This population is the primary target market for EndoDrill®. In the USA and Europe alone, the company estimates that approximately 5 million GI biopsies (gastrointestinal) and approximately 4 million breast and prostate biopsies are performed each year. The diagram below shows the number of new cancer cases and deaths globally for the seven most common forms of cancer, along with BiBB’s product offering for each cancer type. Biopsy is the standard method for cancer diagnosis.

The biopsy instrument market is expected to continue to grow at a compound annual growth rate (CAGR) of about 7 percent, from approximately SEK 15 billion in 2016 to approximately SEK 22 billion by 2022. The number of biopsy procedures is increasing each year as it is the standard diagnostic method for cancer and a relatively gentle and minimally invasive examination. The incidence of cancer is also increasing globally, and the introduction of new national screening programmes brings with it additional needs for tissue sampling for diagnostics. 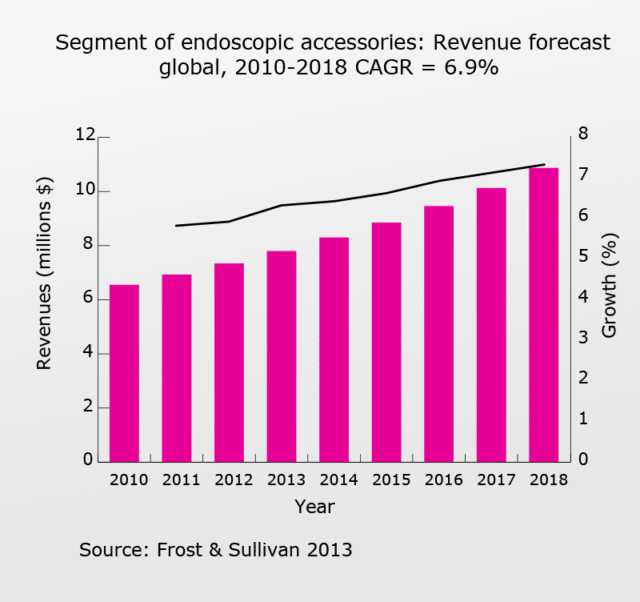 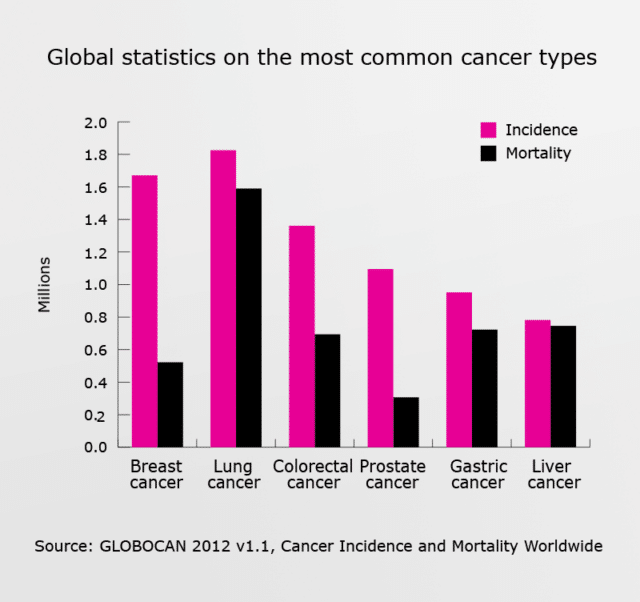 Global statistics on the most common cancer types. Click to enlarge.